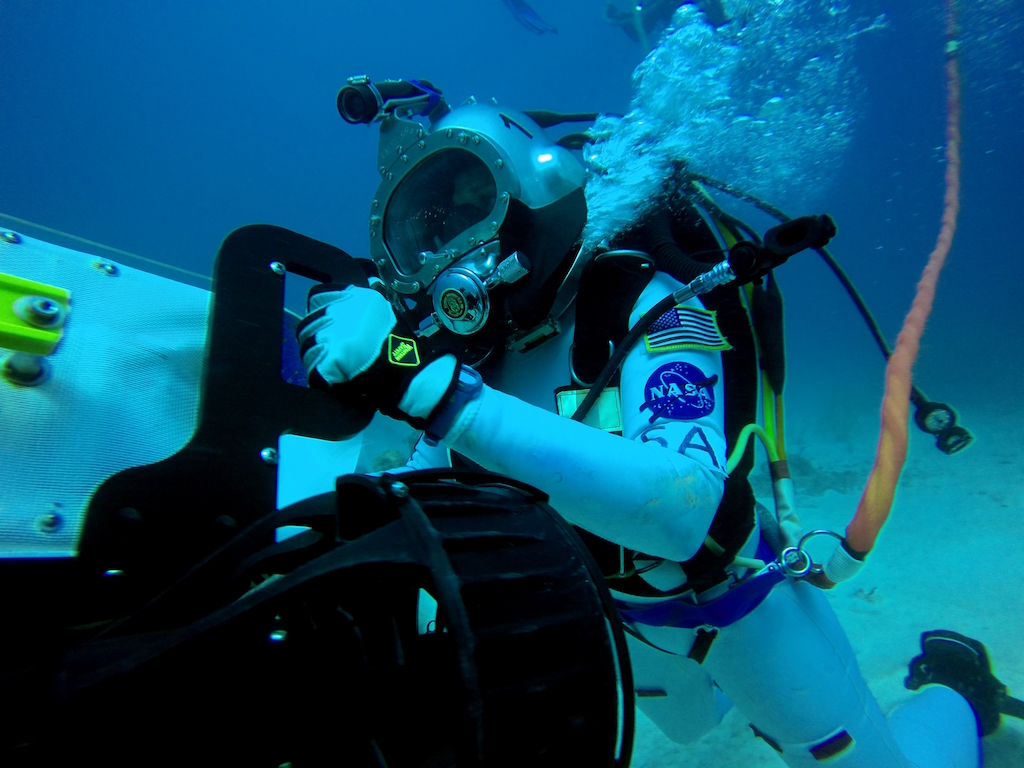 A NEEMO 14 aquanaut practices shoveling underwater, just as an astronaut would shovel to collect soil samples on another planet.
Credits: NASA

NEEMO – the NASA Extreme Environment Mission Operations project – is a NASA analog mission that sends groups of astronauts, engineers and scientists to live in Aquarius, the world’s only undersea research station, for up to three weeks at a time. Operated by Florida International University (FIU), Aquarius is located 5.6 kilometers (3.5 miles) off Key Largo in the Florida Keys National Marine Sanctuary. It is deployed next to deep coral reefs 62 feet (19 meters) below the surface.

The Aquarius habitat and its surroundings provide a convincing analog for space exploration. Much like space, the undersea world is a hostile, alien place for humans to live. NEEMO crew members, known as aquanauts, experience some of the same challenges there that they would on a distant asteroid, planet or moon. During NEEMO missions, the aquanauts are able to simulate living on a spacecraft and test spacewalk techniques for future space missions. Working in space and underwater environments requires extensive planning and sophisticated equipment. The underwater condition has the additional benefit of allowing NASA to « weight » the aquanauts to simulate different gravity environments.

A technique known as saturation diving allows the aquanauts to live and work underwater for days or weeks at a time. After twenty four hours underwater at any depth, the human body becomes saturated with dissolved gas. With saturation diving, divers can accurately predict exactly how much time they need to decompress before returning to the surface. This information limits the risk of decompression sickness. By living in the Aquarius habitat and working at the same depth on the ocean floor, NEEMO crews are able to remain underwater for the duration of their mission.
NASA is developing the technologies and systems to transport future explorers to multiple destinations, each with its own unique – and extreme – space environment. Future destinations may include near-Earth asteroids, the moon, and Mars and its moons. To prepare for these complex missions, NASA must conduct field tests in Earth-based extreme environments to plan, test and develop technologies that will help guide the future direction of human exploration of the solar system.